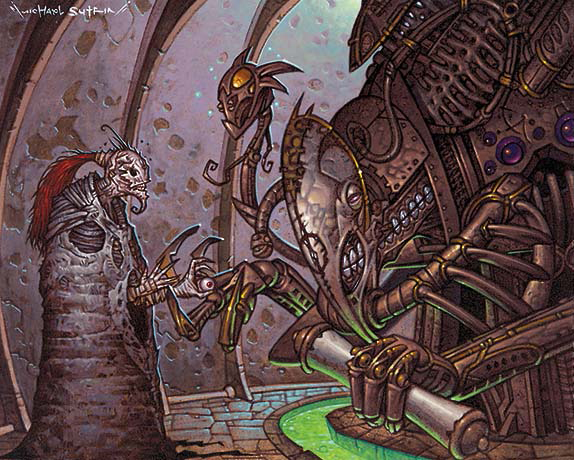 A little more than one year has passed since the last ban list update, at which point Land Tax was unbanned and a few cards were removed from the watch list. The format has grown since then, in terms of the player base and the number and size of the events played. Overall, the format is healthy with a huge variety of decks that see play, whether one breaks it down into broad deck archetypes or specific decks, as I demonstrated recently for the Swedish Nationals results. Recent results from the Italian and Spanish Nationals, as well as from the monthly online league, point in the same direction. In light of this, one could argue that no bans are warranted. Tournament results alone don’t provide perfect information, however, at least not in a quantitative sense. Results are noisy both due to in-game variance and due to which decks people bring to the tournaments. With respect to potential unbans, tournament results do of course provide even less information. Therefore, qualitative judgment and testing have also been taken into account. The changes announced here should be viewed as forward- rather than backward-looking, with the goal of creating the best possible ban list in mind.

Up to now, Yawgmoth’s Bargain has been the only card on the watch list, and despite not having made any big waves in the meta-game, it has been called out as too strong on several occasions. The main concern is the Rector-Bargain deck, ingeniously crafted by Samuel Korsell over a year ago (see his video deck tech here). After having played the deck myself for quite some time I’m convinced that the critics are right. The deck is too fast and consistent. To put some numbers on it I recently goldfished the deck 25 times with the London mulligan rule (now in effect in Premodern, in case you missed it) with the following results: five turn 4 wins, 12 turn 3 wins, five turn 2 wins and one turn 1 win. It only fizzled twice, meaning that it failed to go off with no reasonable chance for a comeback the next turn. It thus wins on turn 3 on median (and on turn 2.9 on average, excluding the fizzles).

The relatively common turn 2 wins is a dealbreaker, since there is little interaction before that in the format, when on the draw. More concretely, you could lose against Bargain-Rector quite often before you’d be able to cast Counterspell or Disenchant. Such scenarios do of course not make for a good game experience, especially as the potential for fast wins for Bargain-Rector doesn’t come at the cost of consistency.

Moreover, the deck is quite resilient to disruption, since many cards stopping Academy Rector, like Tormod’s Crypt, don’t work versus a hard-casted Yawgmoth’s Bargain. Vice versa, cards like Annul don’t stop Academy Rector. Targetting discard versus Rector and Bargain may backfire, due to Reanimate and Replenish out of the Burning Wish sideboard. Regular counterspells are fine, but Bargain-Rector naturally plays Cabal Therapy to strip them away, and there’s also the above-mentioned risk that you don’t even get the chance to counter when on the draw.

Banning Yawgmoth’s Bargain is the most natural way to solve the problem, as it’s the obvious broken card that makes the deck spin. It’s also in line with the current approach to the ban list, which already includes powerful draw spells like Time Spiral, Windfall and Memory Jar, while being more tolerant to fast mana and tutors.

It would be possible to “nerf” the deck by instead banning some of the fast mana, e.g., Lotus Petal and Lion’s Eye Diamond but it would probably be possible to come up with a broken build anyways, with cards like Cadaverous Bloom and Elvish Spirit Guide. That route would also exclude the possibility of building a less broken combo deck around cards like Ill-Gotten Gains or Doomsday.

Banning Yawgmoth’s Bargain takes away some “pressure” from the format’s fast mana. It also opens up the possibility to unban other cards like Show and Tell and Flash in the future, but these cards must first be tested and evaluated on their own merits.

The decision to unban Frantic Search is not directly related to the banning of Yawgmoth’s Bargain, although one could imagine playing the two in the same deck. There’s a lot going on with this card, as it digs through your deck and fills your graveyard at the same time, and it does it for free, or even better filtering or ramping your mana in the process, if you have lands like City of Traitors or Serra’s Sanctum. The card has a broken history in the High Tide deck of old Extended and, presumably, the card High Tide is the main reason why it’s still banned in Legacy. (As a kid, I qualified to the Pro Tour with this deck, so I know what I’m talking about, the deck was absolutely nuts.) High Tide is not in Premodern though, and in the testing that I’ve done with the card, together with my playgroup, it has not shown to be broken.

In particular, I don’t see a storm build exploiting Frantic Search which is nearly as good as Rector-Bargain, if we can use that as a gold standard for a broken deck now. Frantic Search should be a huge boost in particular for Replenish (either “classical” UW or Pande-Burst), and it should also be an interesting tool for some Reanimator builds, for combo Enchantress and for UG Madness. I’m more than happy to strengthen all of these decks, since neither appear to be tier one at the moment.

Being such a super-synergistic card, Frantic Search should come to use in lots of other decks as well. I realize that it’s somewhat of a risk, but I’m ready to take it since I think that there’s a lot of upside.

I have decided to abolish the Watch list. It has served its purpose up to now—of giving a head-up about cards that might get the axe, so that players could build around them with open eyes. But as the format grows and the ban list is starting to consolidate I think it’s getting superfluous and it may even be counterproductive, insofar as people may shy away from testing the cards on the watch list, thus censoring results that could provide a basis for banning or “unwatching” the card in question. The Watch list is superfluous since I can write my opinion and discuss problematic cards and decks informally every now and then anyways, here on the blog or on forums like the Facebook group (and I do appreciate thought-through feedback). 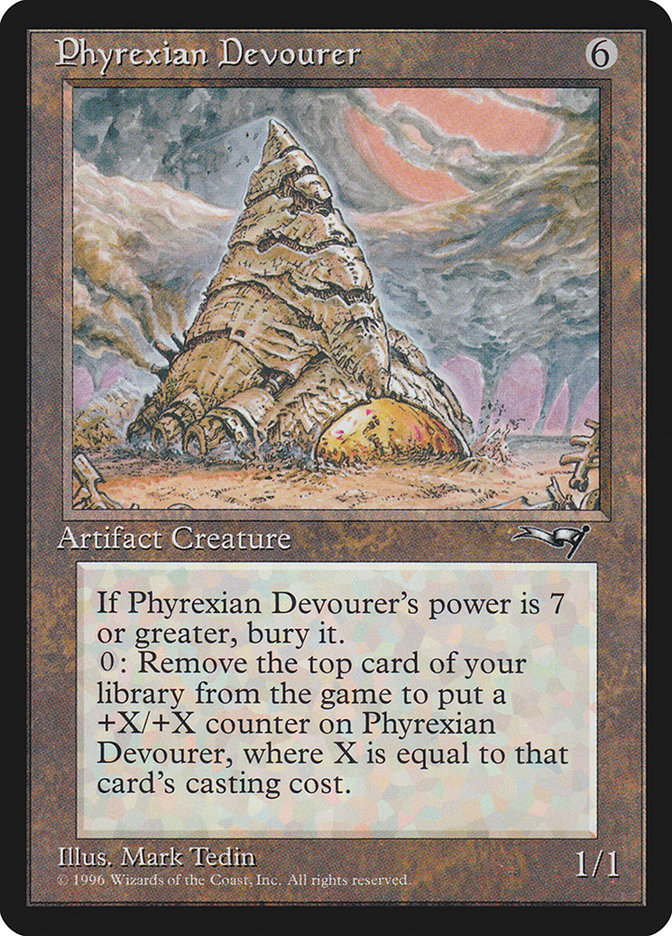 So what should we keep an eye on in the future? Right now, I’m mostly concerned about the Devourer combo deck that Mikael Lindén used to take home the Swedish Nationals with (read more about the deck in the organizer’s report). I haven’t had the opportunity to test it in actual games yet, but it’s scarily consistent in goldfish mode. In the 25 gold fish attempts I did, it pulled  one turn 6 win, three turn 5 wins, three turn 4 wins, 16 turn 3 wins and one turn 2 win (assuming Fellwar Stone could give blue mana). It only fizzled once. It thus wins on turn three on median. Unlike Bargain-Rector, it’s very unlikely to win on turn 2, however, so it should be easier to interact with, and it wins slower on average (on turn 3.3, omitting the two worst attempts, for a fair comparison with Rector-Bargain).

Until we see how the deck performs in actual games and how hard it is to disrupt, I’ll give it the benefit of the doubt. In case the deck turns out too strong, I think that Phyrexian Devourer is the main candidate to let go of. Tinker, Ancient Tomb and City of Traitors also make the deck tick, but these cards all seem to have fair uses outside of the deck, unlike Devourer. I plan to  revise the ban list again next summer. Until then I’ll probably start adding cards like Null Rod and Crash to my sideboard to fight the Phyrexian machinery.

For now, I’m excited about the addition of Frantic Search—and I’m curious to see the impact at the next big tournament, the European Championships two months from now. It’s looking to be a great event, by the way, with several side-events throughout the weekend, so if you have a chance to participate don’t forget to pre-register on the event page! Lotus fields are too valuable to leave undefended.