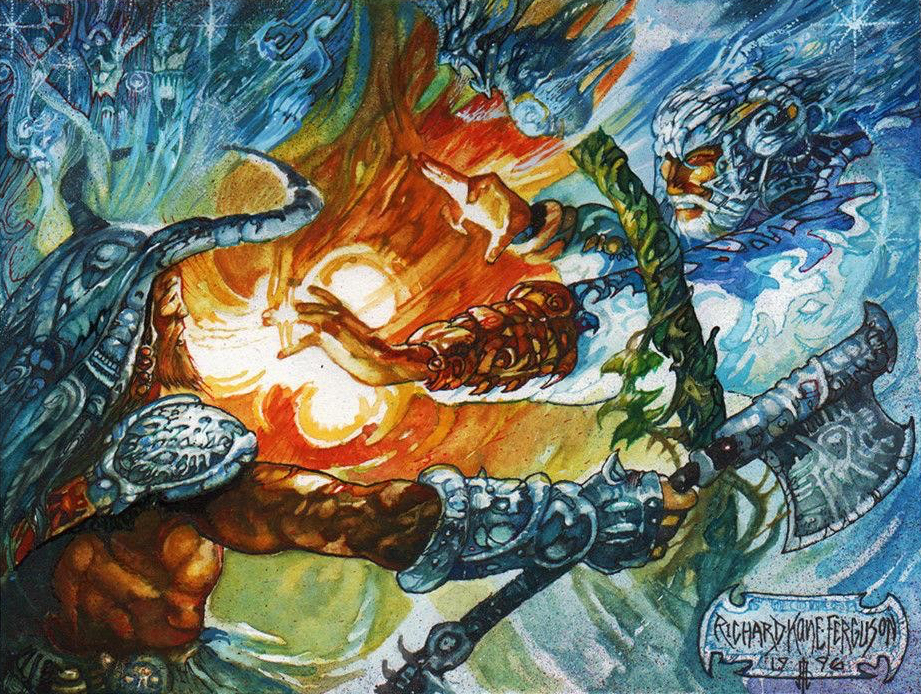 This guest post is written by my friend Sebastian “Seb Celia” Bladh, and is all about counterspells. It includes some novelty called “memes”, which he told me is popular among the kids these days. Much fun! / Martin

Let’s talk about counterspells in Premodern. First off we have the original, and most reliant spell, the actual Counterspell. But it’s not as easy to put it into any deck needing it. Even one of the bluest archetypes in the format, the Trix deck, doesn’t necessarily play it, at least not as a four-off. Since one of the most important pieces in that deck is Sapphire Medallion some players opt to use other spells for their countering needs. The main control decks currently present in the format use Counterspell though. Even the Four-Colour Control deck has it, but after all it typically only includes two Plains, possibly stopping you from casting it on turn 2. The mana in this format makes you think about when you can have access to UU. But both Four-Colour Control and UW Standstill go even further and use Absorb to gain some extra life in the process. I usually add a Forbid in my Standstill deck because you might be stranded with a bunch of cards like Swords to Plowshares or Disenchant that you can’t use in certain matchups. Sometimes you have enough lands, and a hard counter is a hard counter, both the first and the second time you use it. The UW Tax-Rack deck fully uses the potential of the spell, though, as you get to fuel the buyback with new cards from Land Tax.

I’ve seen Dismiss in some decks and if there is something that control players like it’s value. Speaking about value, have you ever been torn about whether to counter your opponent’s spell or saving the mana to cast a juicy Fact or Fiction? Why not do both, with Rewind. Suffocating Blast might be used in a UR deck of your choice if you’re not in a hurry and Mystic Snake is always nice to resolve as it gives you that sweet clock. If you play Survival of the Fittest, fetching it at instant speed by discarding a Squee, Goblin Nabob is when we hit value town. Spelljack and Desertion are just living the dream though.

Other decks that don’t shy away from Counterspell are Counter-Rebels and more tempo-oriented decks like counterburn. These decks are more like today’s Delver of Secrets strategies or previous so called “Team America” decks. These strategies were based on sticking a threat, counter some spells and use land destruction like Wasteland, and a while back even Sinkhole. This takes us to some cheaper counterspells. But cheap in terms of mana usually comes with a cost. In some more aggressive decks we might meet our old friend Daze. Maybe a Force Spike or two might sneak into the deck to if you are feeling cheeky. And kind of free is cheap. Where Daze really shines is in Stasis though where it serves many purposes as you get to replay your islands untapped and counter your opponent spells while he is mana constrained. Regarding “free”, Thwart might also find its way into Stasis (check out Andy Culpepper’s article on Stasis here). Foil can usually only be found as a miser one copy. The alternative casting cost comes at a too high price for most decks as we do not have access to dual basic land types. Even two-coloured decks like Landstill usually have access to only a few Islands. It’s a reasonable choice in the UW Tax-Rack deck and I would probably put one into my Trix deck today.

Two more cards should be mentioned here. The first one is Circular Logic, which is a card that can go together with a variety of cards. Cards like Psychatog, Aquamoeba, Zombie Infestation or, my favourite, Waterfront Bouncer (those two guys really shouldn’t have done whatever they got bounced for). But what all these cards have in common is that there are synergies to be found but we need a few set pieces to make them work. The second card is Misdirection. I honestly haven’t seen one in a deck but might be cool if you expect a big stack of spells and you like to come out on top. It’s great in other extended formats but I don’t really know what important spells we have that would be good to redirect. Divert is probably strictly better. Let us go back to more semi-cheap alternatives for our counterspell needs. I’ll give you a platter of choices to choose from: the main dish should be Mana Leak since it fits in almost any blue deck. The other options are more constrained. Complicate and Miscalculation, are my two follow-up choices on the menu though. Both have some value built into them and they probably fit in a lot of decks at least as one-offs. I play Arcane Denial in my Trix deck since my build is very combo oriented and I like to go for it in the first few turns. Mikael Magnusson—also part of the Stockholm Premodern scene—has a Trix version with Memory Lapse alongside Predict, Foreshadow and Portent as a “gotcha”-engine. In my closing remarks I just like to address the sideboard counterspell options. Red Elemental Blast and Pyroblast or Blue Elemental Blast and Hydroblast might be obvious choices. The blue blasts are underplayed in my opinion. People usually go the Circle of Protection: Red route versus decks like Sligh and Goblins. But it binds up your mana and lets your opponent resolve his Anarchy maybe even before you can stick a threat. Regarding Goblins, your worst enemy is Goblin Lackey and you must set up an array of weird spells to address that problem with a circle of protection turn two. Gainsay is a great sideboard card, in many ways it’s this formats own Negate since it takes care of many problematic enchantments in blue while at it (Propaganda, Back to Basics, Illusions of Grandeur, Arcane Laboratory). Hindering touch might be good if your friend just will not stop playing that Brain Freeze deck, but the CMC of four is a bit steep. If you have problems with some pesky artifacts in your friend’s deck, Annul takes care of that. Lastly, I would like to resolve a Desertion, you know, just for the value of it. The ooze has always been. The ooze will always be.