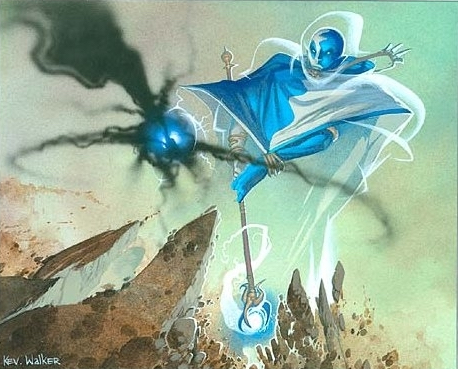 Hello! My name is Ron Taylor, and I was the organizer for the second edition of the Premodern Online Open. These tournaments have hosted players from around the world playing primarily over Skype or appear.in for some good old fashioned (and old bordered) fun.

We started with 27 players initially registered, but due to scheduling conflicts and computer malfunctions we had a few players drop. We played seven rounds and then cut to top 8. Top 8 matches were best of five matches with the first two games played without sideboard. The top 8 players shared decklists with each other before playing to make it more like a GP top 8.

The thing about this tournament that stood out to me was the incredible diversity of decks. There were seven different archetypes that made the top 8, with Enchantress being the only deck to have two copies make it. It featured combo, control, and aggro, with midrange decks also being played in the Swiss rounds of the tournament.

There were alsa a few really cool decks outside of the top 8, such as Reanimator, a White Weenie, a Psychatog, a RG Ponza, a Full English Breakfast, a Bant Threshold, and even a Fluctuator combo! It really feels like you can play just about anything right now in Premodern.

The top 8 players and decks are as follows:

Seven of the top 8 players had a 5-2 record over the seven rounds of swiss, while Felix Heit put up a very impressive 7-0. Hence, this was a tight tournament with very little room for error if you wanted to make top 8. One player posted a 4-2-1 record but that wasn’t quite good enough.

At first glance, I’ve made a few observations. First, Disenchant effects are nearly main deckable, and essentially mandatory at this point. Maybe that’s why the Pink Prison list with two Abolish in the main performed so well. (Never heard of Pink Prison? Check out Erik Sundberg’s article about it!) Second, there are a few decks that absolutely prey on aggro, including the Enchantress and Pink Prison decks that made this top 8. If you plan to play aggro, you better be packing some sideboard cards for those matchups. Third, I still think combo decks are underplayed. I think that part of the reason for that is the cost of cards like Mox Diamond, City of Traitors, and Academy Rector.

A few of the people involved are discussing ways to improve these tournaments and make them more frequent. If you would like to join the discussion and share ideas, find us in the Premodern Facebook group or the Premodern Discord Server. If you want to play in the next tournament, keep your eyes and ears open for the next round of sign-ups.

Until next time!
– Ron An army from a soldier, a flock from a bird, a school from a fish . . . a profit from an atrocity.