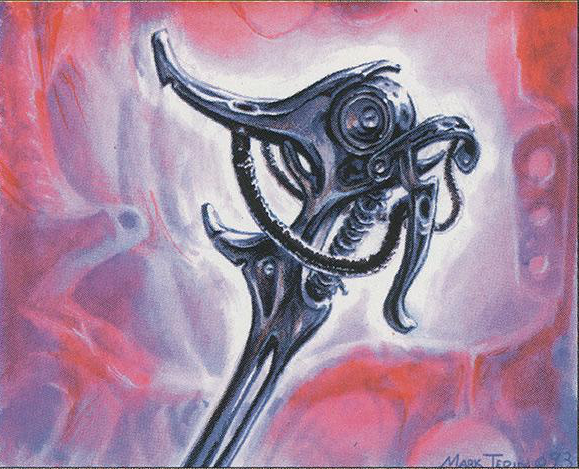 It was a beautiful day for 20 year old cardboard in Tampa, Florida. The sun was shining, the humidity was oppressive, and the air conditioning was pumping. On Saturday, June 29 of 2019, we played our first Premodern tournament at Sunshine Games.  It was a fairly successful event with 13 players despite it being a fairly unknown format and having a large event in Atlanta, Georgia on the same day. One player drove in from Jacksonville, Florida (3.5 hours away) and one player planned his summer visit of family members in the area around the tournament. 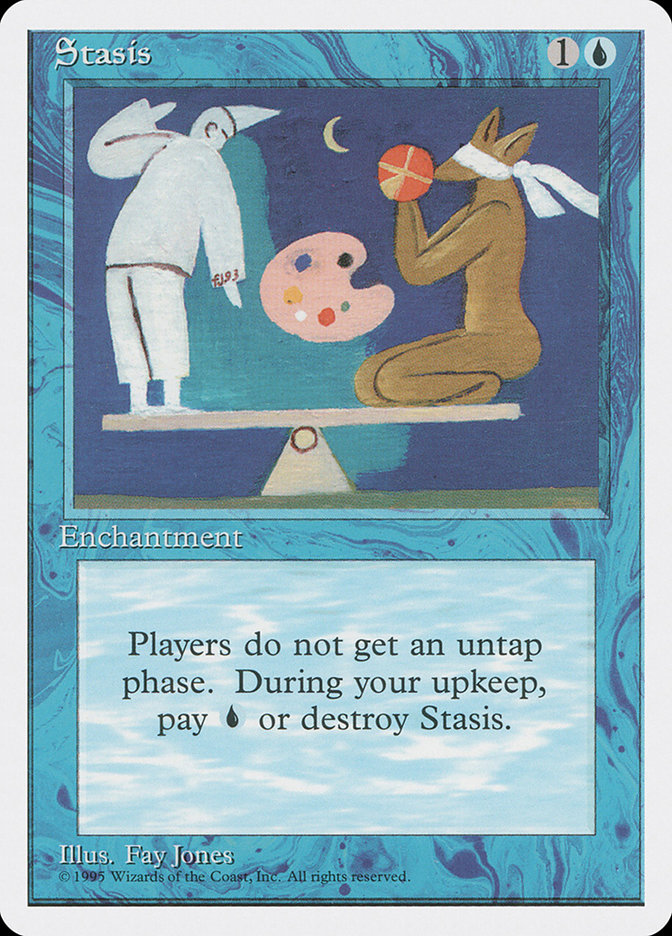 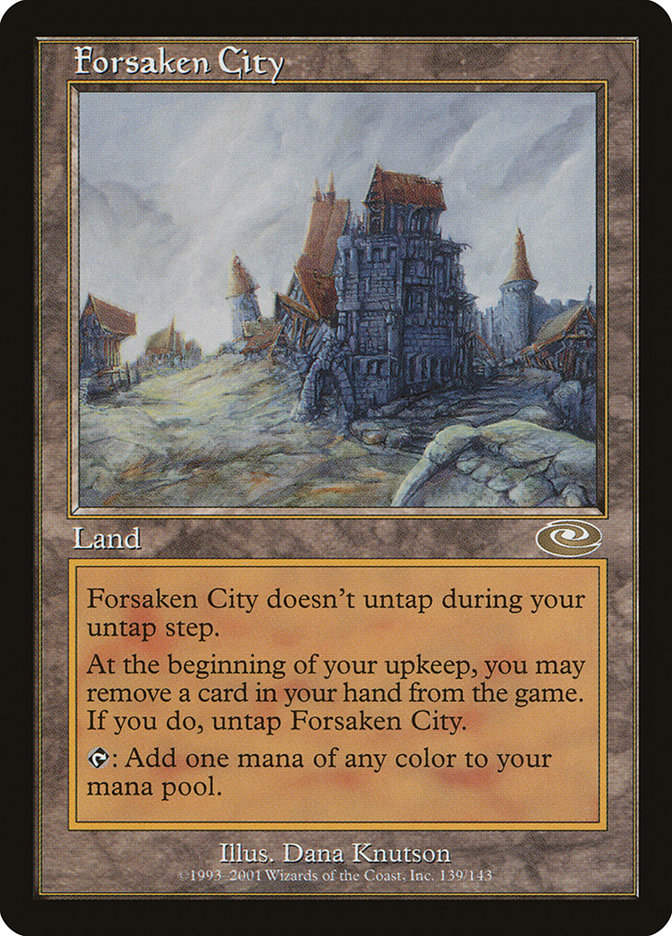 The tournament was four rounds of Swiss play with a cut to top 4. It was a very diverse field, and I’ll get into a number of the decks later on. I decided just before the tournament started to play a deck that everyone loves—Mono Blue Stasis. I’ve always said that the best kind of fun is the kind where you’re the only one having fun. In round one, my opponent opened with a turn 1 Llanowar Elves and followed up with two Priest of Titania and a Gaea’s Cradle. I was able to land a Stasis before too long and had a Forsaken City to be able to keep paying for it. Unfortunately, my opponent cast a Biorhythm and I only had two Islands in play (since I decided to play a Forsaken City instead of a third Island) so I was unable to Thwart it. In game 2, my opponent went into beatdown mode with an Elvish Champion and I was unable to find a Stasis in time.

Round two versus UW Standstill, was particularly brutal. We split the first two games, but I don’t exactly remember how. I remember game 3, in which we went to time and drew. I had a Stasis lock with two Howling Mines in play, but he had already destroyed or countered all three of my Black Vises, and I was digging for my Feldon’s Cane. Unfortunately I couldn’t find it in time to close out the game. 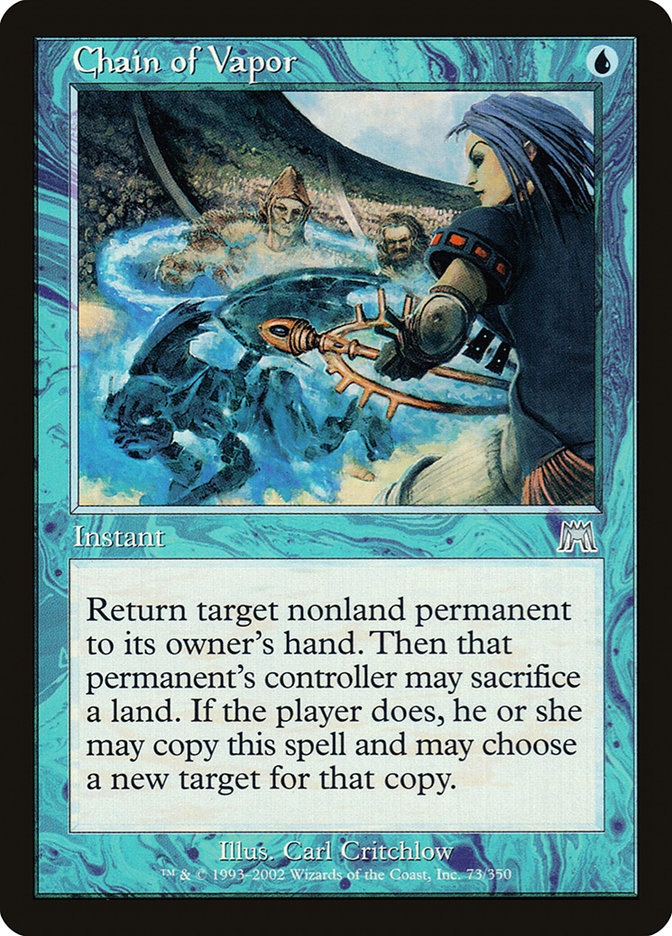 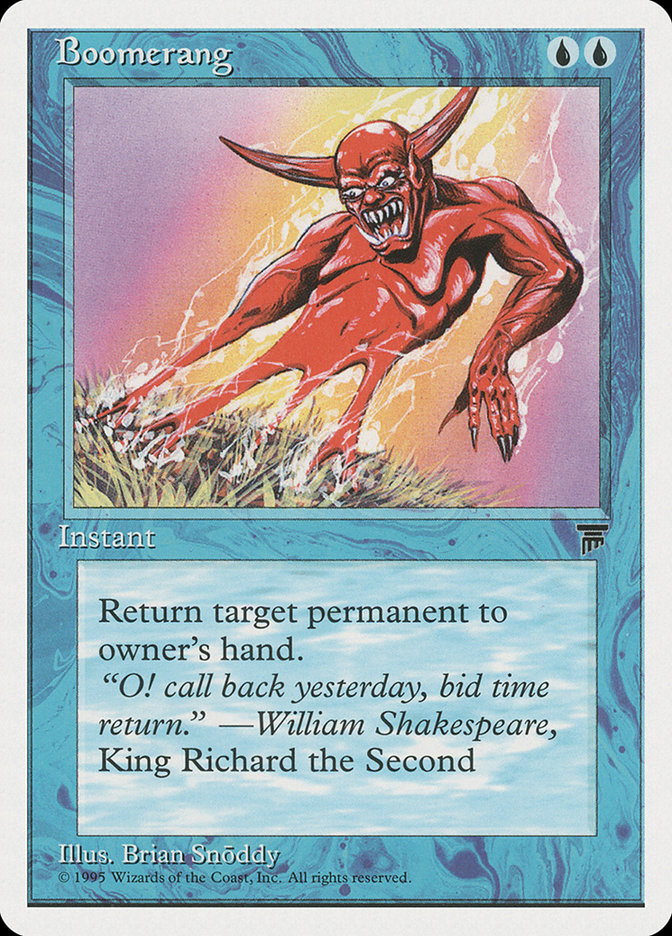 Round three I played against Tinker Prison. This matchup came down to how effective my bounce spells were.  In game 1 he was able to Tinker out an early Mishra’s Helix, but he had to invest a Lotus Petal, a Tinker, and an Urza’s Bauble into getting it in play.  His only land in play was a City of Traitors, so I knew he wasn’t going to be able to replay it soon, so I cast Chain of Vapor on it during his end step.  On his next turn he tapped his City of Traitors, played another City (sacrificing the first) and tried to cast a Thran Dynamo.  I saw that my path to victory that game was cutting off his mana, so I countered it.  He played an Ancient Tomb and a Phyrexian Processor paying ten life. I Boomeranged that and blew up his token with a Powder Keg. He saw the writing on the wall and conceded. Game 2 was much closer.  I got out an early Black Vise and Howling Mine and he played a Tangle Wire. Forsaken City helped me fight through the Tangle Wire by untapping itself after its effect had resolved. I was able to get a Stasis down after his Tangle Wire only had one counter left on it and locking him down with Stasis, Howling Mine and Black Vise was enough for the win.

Round four was against BUG Oath. I don’t remember the first game very well, but I know I won it. The second game was a good one. My opponent was able to get down an early Shadowmage Infiltrator and got out to an early card advantage lead.  I was a little worried about fighting through all of his counters that Finkel was inevitably drawing for him. I cast a few Gush to try to catch up.  I forced a counter war on his turn to get him to tap a lot of lands so that I had a window to resolve a Stasis on my turn.  A few turns later, I let him resolve a Pernicious Deed so that I could Stifle the activation.  I was able to get a Howling Mine and a Black Vise in play after that and it was enough for the win.  Unfortunatley, at 2-1-1, I missed out on the top 4 due to tie breakers since I had a poor start to the day. The top 4 had some awesome matchups.  The semifinals saw a pairing of Biorhythm Elves  against Reanimator and UW Standstill against RG Fires of Yavimaya.  The matchup of Elves versus Reanimator had three very close games.  Game 1, the Reanimator player won after taking Biorhythm with a Cabal Therapy to stay out of danger.  Game 2, the Elves player initiated the beatdown with Elvish Champion after Naturalize took care of an Animate Dead. Game 3, the Reanimator player drew to eight cards and discarded an Akroma, Angel of Wrath without playing a land. The Elves player was able to win the match by swarming the board with creatures to attack past Akroma for the win with only two life remaining. In the RG versus UW matchup, Wrath of God proved too much for the Fires player to recover from in game one.  Two soldier tokens and four manlands finished the game off.  In game 2, Fires got off to a fast start getting the control player down to eight life before Wrath of God cleaned up the board. Fires had three Lightning Bolts in hand while facing pressure from manlands, so he just laid all three bolts on the table, hoping it was good enough. The control player showed him a Forbid and Fires packed it up.

The finals was a tale as old as Magic. Magic, exactly as Richard Garfield intended it to be. Elves against UW control (Standstill). In the first game, the Elves player got out to a fast start with mana dorks and an Elvish Champion. UW was able to cast the turn four Wrath of God, but Elves followed up with two more creatures. The UW player ended up stabilizing on two life and took over the game with two Standstill, a few counters, and ultimately manlands won the game. In game 2, Swords to Plowshares took care of an early Priest of Titania, but the Elves player immediately played another Priest. A few turns later, there are two Deranged Hermit in play, and the UW player can’t find a Wrath of God even after casting two Impulse. Game 3, the UW player resolves the obligatory turn four Wrath of God and holds off any would-be attackers with a couple Mishra’s Factory. The Elves player builds up a few possible attackers, but his opponent lands a Powder Keg. Elves, realizing there is only a one-turn window to win the game (since all of his creatures are one-drops), crosses his fingers and casts an Overrun. Forbid takes care of the Overrun, and the match is over. Of the thirteen players, I believe the only deck that had more than one person playing it was UW Standstill.  We also saw Oath, Reanimator, Suicide Black, The Rock, Tinker Prison, UG Madness, and of course Mono Blue Stasis.  I was surprised to see a few archetypes were absent.  I didn’t see any red aggro (either Sligh or Goblins), no Survival decks, and no Bargain decks (besides the one copy in The Rock). However, I didn’t see every deck, so I might have just missed them.

Many of the participants were discussing making this a regular monthly event. There was certainly plenty of excitement and enthusiasm about the format, so hopefully we can build on that. That’s all for this time, come down and see us in the Sunshine State at Sunshine games, and sling some old dusty cardboard with us! "Argoth's doom rained from a clear sky. Yavimaya will not share that fate." —Multani, maro-sorcerer