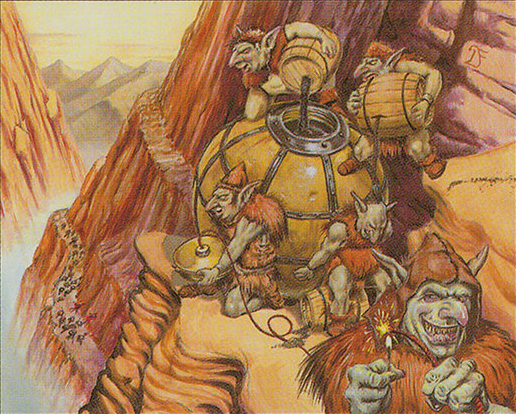 Anton Glans is back on the blog, this time with a report from “Norrlandsmästerskapen i Premodern” (the Northern Swedish Championships), which he organized in October. Cheers! / Martin

In Örnsköldsvik—the small town in northern Sweden where I’m from—Legacy is perhaps the most played Eternal format. However, we do also have an awesome play group of Vintage, 93/94 Old School and Premodern players. Örnsköldsvik has thrown the Norrland (the northernmost region in Sweden) Championship in Legacy the last 5–6 years. Historically we’ve gathered 35–45 players for that tournament, and lately, people from the southern parts of Sweden have traveled to fight for a chance of the eternal glory of the North, too. This year, we thought we’d make a weekend out of it with Legacy on Saturday and Premodern on Sunday. Since we planned three months ahead, we had time to gather a really cool prize pool. I got a hold of various Premodern boosters and Joel Grenehed grabbed a super sweet signed Recurring Nightmare playmat at the Magic Fest in Ghent. Last but not least, Tobias Hedlund, who is a woodshop teacher, crafted an epic trophy for the occasion. The winner would also get a Powder Keg signed by all players. We ended up with 12 players. Even though not grand in numbers, the players in this community are really awesome, and the fun and friendly atmosphere really exceeded anything we could expect. We went for four rounds of Swiss followed by a top 4. What follows is more of a tournament report from the perspective of me as a player rather than an organizer.

I hadn’t decided what to play but I had a few decks to choose from. I let two friends borrow one each, and of course they’d get to choose first. They decided to go for Suicide Black and UW Standstill respectively. I thought there would be a lot of combo and control, and thus I wanted aggro more represented, so once more this year I chose to play Biorhythm Elves.

The meta breakdown for the day was as follows:

In game 1 I mull to four. I don’t win that one. Cabal Therapy happens and I get to see Aluren do its thing.

In game 2 I managed to sneak in with Overrun for the win after some dueling, boarding out Collective Unconsciousand one Biorhythm for Naturalize and Masticore. Game 3 I don’t really remember, I think it was a somewhat tight game, and Mikael drew a couple of surplus lands instead of combo pieces, and my little green men could beat down.

Calle is a friend and local player from Örnsköldsvik, and we’ve played this match-up a few times before. It’s usually really tight. I win the dice roll and manage to spit out fast Elves, and Calle gets out a Temporal Aperture. I think he gets two activations with Aperture but he doesn’t find anything useful, and I can Overrun for the win. In the second game Calle plays all the mana artifacts in the world, followed by Masticore and Cursed Scroll. After some pinging I manage to resolve Null Rod, but Masticore is to large and takes the win. The third game is really tight. My elves run into Pyroclasm two times (elves don’t like fire). The third time I can follow up with a Caller of the Claw, creating two bears. I follow that up with an Overrun and win after quite some time.

I’ve played this match up some, but not much. It’s not as bad as one would think, though it’s absolutely favoured for the Sligh player. Johan is also a friend and local player, who just got a hold of Sligh (traditionally played UG Madness before). First game is a trade for resources, Johan gets more creatures than burn spells, but I don’t face any Grim Lavamancers (yay!). My elves are pumped by Elvish Champion and Overrun and I can win from there.

In the second game Johan burns four of my creatures by pitching one red card (Pyrokinesis)… yup, that card seems fair. Grim Lavamancer joins his team and I’m out.

In the third game, I think Johan mulls to six or five. I get Multani’s Acolyte + Wirewood Symbiote, find a Masticore and can close game with really few life points left (Masticore is MVP in this match up).

Joel and I are the only 3–0:s, and we decide to draw in order to run downtown to grab everyone coffee and eat a hot dog.

Another friend and local player, and we’ve played this format quite some against each other. I absolutely love his spicy brew! However, it contains Worship. Not cool bro.

I start with a lot of green dudes. He can play Worship from his hand on turn 3 or 4, timely before he’s dead. From there we have a staring contest, I manage to find an Elvish Lyrist a few turns after, and Andreas can’t beat down with Nantuko Husk through my wall of green. I Overrun him once Worship is destroyed by the innocent Lyrist.

In Game 2, Andreas mulligans to four or five. He starts by blind naming Fyndhorn Elves with Cabal Therapy and succeeds. I don’t have another one-drop, so I play Forest, go. He then plays mana dork and saccs Therapy for my two drop (Priest of Titania or Multani’s Acolyte, I don’t recall). A turn later he picks up another Cabal Therapy and manage to totally rip my hand apart. A turn or two later he finds Academy Rector and from there he can establish the Worship lock and eventually Akroma beats me down.

Game 3 is quite fast. I pressure him with the help of Elvish Champion, as forestwalk is quite important to get past his walls. There’s a point where I think he’s dead next turn, but he Pattern of Rebirth‘s for Phantom Nishoba. I can’t win through that one without Overrun. We draw go. Next he gets an Akroma, Angel of Wrath in to play, and starts swinging me. On my turn I draw: Overrun!

Another Sligh (Tobias faced Joel in the mirror in the semis). So I’ve been paired three times against three different Sligh players in six rounds today. With Elves. That sucks.

Okay, I start. I manage to win the first one, a really close game as always (I think I had 3 life points left in the end) where he draws one land to little and my green men manage to swing through. In the second game he wins after quite some time. My singleton Winter Orbfrom the board takes care of his Cursed Scroll mana, and I can find a Naturalize in time before he can abuse Cursed Scroll more than once. I get him down close, but Fireblast takes care of my last life points. On to the third game. I get Masticore, elves, and have him down to 8 life. I’m at 12 myself, and I feel safe, as Tobias should be dead next turn. He has three cards in hand, and three mountains on board. He draws. He plays Mountain. Flame Rift, Fireblast and Flame Rift. Making both of us die. A really sweet play by him, but totally dream crushing for me! So we get to play a fourth game to settle the finals! This time, he can handle my green men fast, and establish control with a Grim Lavamancer and a Cursed Scroll. After three turns it seems quite impossible to turn it from here. Small green men are burned in a world of fire. Tobias wins and becomes the first Northern Sweden Champion (sounds better in Swedish; “Norrlandsmästare”)! Hat’s off to you sir! Here’s the happy winner with a signed Powder Keg: Okay, a second place in this meta felt really sweet, and a Scourge and an Onslaught Booster even sweeter (I haven’t opened them yet though… *foil Polluted Delta*). The sad part was that I didn’t get to play Biorhythm or Collective Unconscious all day, instead I won exclusively with Overrun. My Biorhythms were therapied away against Aluren, though. But I guess the only deck where Collective Unconscious might have had time to shine would be in the semis. Against burn and fast combo with disruption, you can’t expect to have the creature count nor the time to develop crazy Collective Unconscious loops. I think two Deranged Hermit instead of two Birchlore Rangers is the next step for the deck.

Anyway, a short report from an awesome weekend. I truly hope that this was the start of something great. Next year we hope for some more players, and perhaps a Premodern booster draft as a side event :D! When the Talruum began to play, the dragons fell from the sky to squash the obnoxious noise.