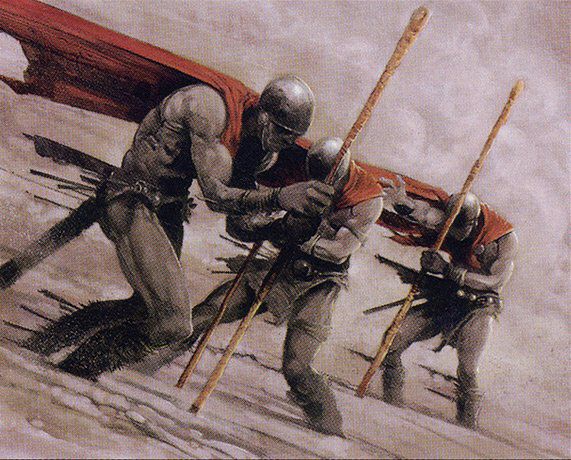 In 2018 I introduced the Premodern Magic Community Award, acknowledging a person who has done something extra for the Premodern community and the format during the year. The first award went to Matteo “Mr Magic” Caravatti.

Although we’re almost a month into 2020 already, I hereby announce that the 2019 award goes to Francisco José Cumplido Rica from Madrid, Spain. The motivation is as follows.

Francisco was also co-organizer of the 2019 edition of the European Championships in October, where I announced the award to the participants and handed over this two-player Khalsa Brain Spellground playmat as his prize. Here’s a short interview with Francisco.

Martin: Tell me a little bit about yourself. Where do you live and what do you do for a living?

Francisco: I’m 28 and I live in Madrid. I’m an accountant, currently looking for a new job.

Martin: How and when did you start to play Magic, and how did you discover Premodern?

Francisco: I started to play in 2003 with Onslaught block, but I waited until summer 2003 to buy my first Magic cards. I bought an 8th Edition pre-constructed deck (the white one) and I filled it with all possible clerics. It was fun because it caught me a lot (I usually played with classmates in high school). I stopped playing in 2004 because of studies and I returned in 2008, around Lorwyn block.

I discovered Premodern when I saw some posts in the old school community groups on Facebook and some people here who play Legacy and 93/94 wanted to test the format. I decided to make a WhatsApp group and discover things about the format. This was about one-and-a-half years ago, time goes fast.

Martin: Do you have any favourite Premodern cards or artwork?

Franisco: I like Absorb a lot, and Tireless Tribe too.

Martin: Madrid has a great Premodern community, can you tell the story about how it emerged and grew, how big it is today, and your role in that?

Francisco: It emerged because of the WhatsApp group, people demanded it. First, tournaments and then a monthy league. I was skeptical initially but already in the first tourney in the league there were 15 people attending. To be honest, I expected less people because they were still buying cards and preparing their decks. The nostalgia factor is their main reason for them to play the format. Also it’s a healthy format, I mean, they enjoy playing it and you see by the results of the league the diverse meta-game. Madrid Premodern isn’t only me, it’s also Salas. Salas puts the results on the blog and makes the posters for the monthly tournaments, his work is necessary to make the league in a proper way. I write the league’s rules and arrange the tournaments with Tempest Store, help with the prizes and we both run the Madrid Premodern Twitter account.

Martin: In particular, what’s the Madrid Premodern League and how many players usually attend?

Francisco: The main purpose of the league is having fun, but the league rules also adds the spice of competition. I mean, we usually play for fun this format because most decks have their nostalgia component, but I wrote the rules partly in a competitive spirit because most players here want to compete.

The range of attending players is typically between 16 and 20 players, the current record being 22.

Martin: Do you have any advice for growing your local Premodern community?

Francisco: Search for people who want to play the format and talk with as many people as you can. Most people seem interested in playing quiet meta formats, and Premodern is for sure one of them. And cheapness is one of the best reasons to play this format, a lot of people here in Madrid have a Premodern deck.

Martin: What other formats, besides Premodern, do you play?

Francisco: I usually play Pauper, Commander and I’m curious about Pioneer because my friends play it, but I gave up on other formats, I don’t have any interest in them.

Martin: Looking forward to 2020, do you have any plans Magic-wise or in general?

Francisco: Magic-wise, having fun playing this game. But I put Magic a bit in the background recently, in order to prioritize other interests and goals in my life. I made the game the center of my life previously and I realized that it isn’t correct for me.

Martin: I can definitely relate to putting too much time into Magic at some times. When you get that feeling it’s often best to lay low a while to avoid burnout. With this game, eventually the flame will kindle again. And with Premodern you don’t have to worry about the whole card-pool changing at least, if you take a break. 🙂 Good luck on your 2020 goals, Francisco, and thanks for the interview and for your contributions to the community!

Cheers, and see you in the Premodern social media channels! The Keldons would never admit it, but Greel unsettles them, too.