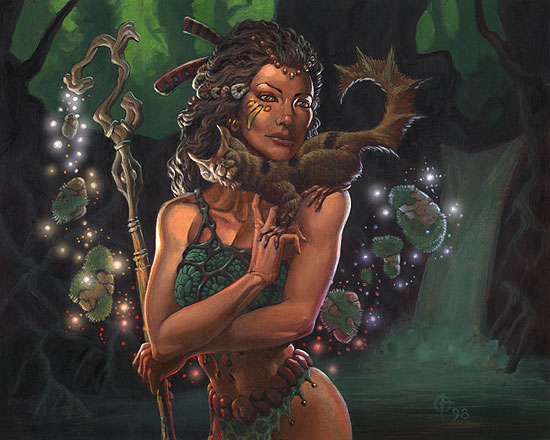 The Premodern Magic Community Award is to acknowledge someone who has done something extra for the Premodern format and its community in the past year. The 2018 award went to Matteo Caravatti from Italy, and the 2019 award to Francisco José Cumplido Rica from Spain. I hereby announce that the 2020 award goes to Andrew Walker from the US, with the following motivation.

Andrew has organized and promoted the monthly Premodern online tournaments with great consistency, a significant contribution to the growth of the online scene and the Premodern community as a whole. As a co-host of the Premodcast, Andrew is also an appreciated content creator. His passion for the format and its people always shines through.

I’m yet to meet the man in person, but as tradition now has it, I sent him a Khalsa Brain Spellground two-player mat. I did a longish interview with Andrew (his son had to interrupt and literally drop the mic to make him stop talking), which is available in its entirety here. For the purpose of this blog post, here’s a condensed version.

Martin: Who are you, Andrew?

Andrew: I live on Long Island, New York, about an hour east of New York City. I’m a marine biologist. In the past, I did research at sea, whereas currently I’m working for New York State with tidal wetlands and shoreline habitats. My job as a manager these days involves both work in the office and in the field, but mostly the office. My most memorable moments at my current job were when I surveyed the shorelines of Long Island and parts of NYC in a Blackhawk helicopter, after hurricanes Irene (2011) and Sandy (2012).

Martin: Besides work, being a father of three kids, and Magic, do you have time for any other interests?

Andrew: In theory, reading, but there is not so much time for that these days, as the kids are still a bit too young to entertain themselves.

Andrew: I was a senior in high school (age 17) when friends into D’n’D introduced me to the game. A few of us were in the high school’s marching band and we used to whip up decks and play in between practice time. Chronicles and Ice Age are the first sets I remember seeing. We used to play Emperor, a casual three-vs-three player format where you first are supposed to take out the generals (flank players) and then the emperor in the middle. I continued to play throughout college. My first prerelease was for Weatherlight, and I remember getting my six-digit DCI number there, in awe of the veterans with only four-digit numbers. Back then, you’d have to go to a particular place to play in the state prerelease (before the later system when local game stores were allowed to host prereleases), and at some, I would help run the main event and side-event drafts (with booster boxes as pay, yay!). I had a roommate in college who was a business major and saw the potential to make money from the game by buying and selling collections – my task was to post auction or buy/sell posts on bulletin boards and mIRC.

While home from sea (the year between college and grad school), I attended GP Boston 2001 and passed the Judge test. I still have my zebra-striped Judge shirt from my days as a Level 1 Judge (2001–2005).

I continued to play in grad school in Virginia (lots of Friday Night Magic), up until Champions of Kamigawa in 2004. After that, I focused on work, including working at sea for another year. I kept all my cards in boxes in the garage, though, for about ten years, including the full Power Nine.

An important life-event in 2009 eventually contributed to me coming back to Magic. I was playing the drums on Rock Band with my wife on guitar when I realized I was having issues using the drum sticks. I brushed it off, but it was the same the next day. It took a period of about ten months until I finally got diagnosed with early onset Parkinson’s disease, which left me quite depressed. About five years into it, I got the advice from my doctor to not only exercise my body, but also to stimulate my brain. That triggered me to think about Magic again, which I knew really fires up the connections in the brain! And since I started playing again around Fall 2015, my doctor has told me that my condition was relatively stable, so possibly it helps… For those interested, I have written more about my experience in this tournament report.

Martin: How did you get into Premodern?

Andrew: When I started playing again, I pretty much went into non-rotating formats like Legacy and Vintage (remember, I had kept all my cards from back in the day). In order to update my decks, I went to my local game store to trade in some old cards like Moat and Nether Void. Less than two months later, I saw that Moat had jumped in value, and that was how I became aware of the 93/94 Old School format and its increasing popularity. Through that format, I ended up hearing about Premodern from Jared Doucette. That was right up my alley since it overlapped with my playing history almost perfectly! Premodern was pretty much an online thing from the start for me. In the early online tournaments (before the Monthlies), I played Enchantress, probably my favorite deck, and did quite well.

After that, Jared started organizing monthly tournaments, via the Premodern Online Play Facebook group. Eventually, he asked me to take over the Monthlies around March 2019 since he was busy with the 93/94 online league he was also running. The Premodern Monthlies had around 20–30 players each month in the start. Fast forward to COVID, and the Spring Fling event in 2020, when we hit around 60 players, which amazed me at the time. From there, it has continued to grow steadily and we’re now averaging over 100 players per month from up to six continents! Martin: On behalf of all of the community, thanks a lot for all the work you put into the online Monthlies Andrew! A lot of people are grateful for the opportunity of playing and socializing that it provides, especially during the pandemic. But besides the online Monthlies, you also co-host the Premodcast with Mike Harris and Jared Doucette, and I noticed that your first episode premiered a year ago. Tell us more about it!

Andrew: We just released our 22nd episode, so we’ve averaged almost two episodes per month up until now. How did it start? Things just pointed in that direction… Originally, I was actually thinking of making a podcast interviewing Magic artists. Since I collect signed cards, I have a lot of artist contacts, and I’ve also met up with a few of them through Mark Aronowitz, an agent for quite a few artists, as he lives very close to me. I did some brainstorming together with Mike and Jared, and with Mike’s background knowledge and work experience, we came up with the basic format for the podcast as it is now, with recurring points like recent card pickups, deck talk, events, judge corner, etc.

Martin: You also run the channel Mise Well Watch on Twitch and on YouTube, where you stream and post games from the online monthlies. Is this your the next thing, getting deeper into streaming?

Andrew: Well, it’s still pretty low-end, but there are certainly some angles to explore with that format. We’ll see in the future…

Martin: Great stuff, Andrew! Thanks again, for your contributions to the Premodern, and thanks for the interview! It scattered falcons like a lion hunting among jackals.